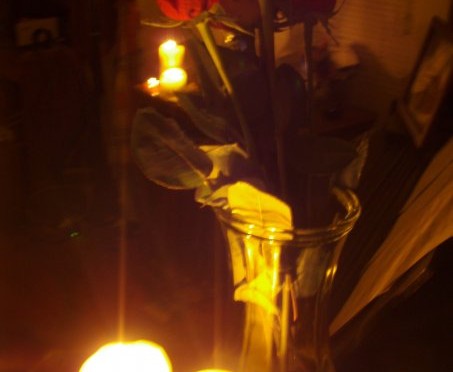 Perhaps not every girl dreams of the day she will face someone, down on his knee, asking her to marry him.  Some girls feel sure they can conquer the world entirely alone and are often surprised or even derailed by the love that sneaks up on them.

I am not that girl.

I am the girl who has loved babies since before I was strong enough to hold them on my own.  I am a total sucker for the happy endings, and have imagined mine from the time I understood that I could have my own love story.  I was voted (unofficially, around a college cafeteria table) Best Future Housewife (based, I’m almost sure, on the fact that I was one of the very few girls who could cook).

So fast-forward through 20+ angsty years of waiting for Mr. Right to finally come calling and there I was.  27 years old, dating someone who actually liked me as much as I liked him (maybe even more!).  We had talked about marriage; it was The Plan.  He had just over 2 years left of med school, I was ready to move across the country to cook his meals and take care of everything but the studying that only he could do, and we were ready to get married.

Although I tend to hope for and anticipate surprises so much that I rarely get to experience their full weight, this time I wasn’t expecting it.  It was March, and I was flying to Detroit to spend David’s birthday weekend with him.  My flight arrived on a Thursday night, and he had a test the following morning, so our plan was for me to spend the night with his aunt and uncle (which I did) and meet him after his exam.  This was a big exam, but so was every test in med school.  His first two years had been, shall we say, rocky, and his academics before I met him were shaky.  When I first met David, he was just climbing out of an academic nightmare, finally on solid footing but with special restrictions such as: you cannot fail another exam or that will be it.  Finished.  That was fine, though, because he wasn’t going to fail this, or any, exam.  He was going to do just fine, he told me.

You may be guessing that he didn’t do fine.  By the time he had arrived at his aunt and uncle’s house to pick me up, a terrifying email was waiting for us in his inbox.  You did not pass the exam.  He read this just a few minutes after he walked in the door, and I immediately ran into the hall bathroom to hide, and cry.  We both knew what this meant.  We had Plans, Dreams!  We were going to get married and fly to some country in great need of medical care and Jesus, and we were going to help people!  But.  Maybe not.  Our plan had been interrupted.

I called my friend Jess from the bathroom.  This is what I do when I don’t know what to do. She has a way of saying the right thing, or at least crying if there isn’t anything good to say.  So we cried.  There was nothing to say to fix it.  Only, what are you going to do now, Mandy?  How does this change things?

I remember my Dad being confused about how this seemed like such a game-changer to me.  Are you just wanting to marry him because he’s going to be a doctor?  A career change shouldn’t call the relationship into question, right?

Right.  But I had lost my footing.  It wasn’t that I was falling into a terrible abyss, but where I thought I had been standing on rocks turned out to be an unpredictable ocean.  The cold water was surprising, and frightening, and I wanted to know where I was again before I made any more plans.

That’s what I told David.  On the day that he had planned to ask me to marry him, I told him I wanted to take some time to figure out what all of this meant before making any plans.  That morning, he had filled his house with candles and 100 red roses.  He placed rose petals on his ceiling fan, carefully, so they would flutter down around me at just the right moment.  He searched record stores and finally found the one he wanted, Norah Jones, to sing “Come Away With Me” into my ear.  Everything about the day had been planned, except for failing that test.

Of course, I didn’t know about all of that.  Yet.

So, confused and disappointed and afraid, we started walking through that difficult day together.  We went to World Market, one of my happy places, and didn’t buy anything.  Just looked at intricate Indian fabrics and smelled sandalwood candles that remind me of home.  We talked about normal things, in between talking about some of the scary questions the day brought up, and we cried.  I didn’t know how to fix the mess we were in, but I knew that I loved the person whose hand I was holding through it.  We were going to be okay, and even more than okay, I just couldn’t see that.  All I could see were looming questions and tough times.

About the  middle of the afternoon, we decided to go see a movie together.   I didn’t realize at any point that we had entirely avoided his house during the whole day.  We were just a few miles away, but hadn’t made it back there yet.  We were distracting ourselves from reality, and he was distracting me from his Surprise.

We decided to watch Confessions of a Shopaholic, most likely because there were zero other good options.  It isn’t really our “type” of movie (we’re more Argo or Braveheart or Anne of Green Gables people), but I wanted something light and fun, the opposite of our day.  I don’t remember what the movie was about, exactly, because that’s the one and only time I’ve seen it, but I remember a really feel-good ending and some statement about embracing life and love fully.  I went to the bathroom as the credits were rolling. leaving David in the dark to think about his life.  While I was gone, I asked Jesus a simple question: what is it that matters to you about people?  Do you care if they fail tests or don’t have a perfect body or cry in public on hard days?

Obviously, when pressed, we can all come up with a decent list of the things that Really Matter about people, but it’s harder in the normal parts of life when our decisions are not written down but just acted out from one small step to another.  All of my steps had been leading to David, but I had to make this big jump at the end, taking his failures on as my own, and that’s something I’m not very practiced in.  Not that I’ve never failed, but I certainly have never failed in school.

But by the time I was walking back to the dark room with my sad love waiting for me, I knew I needed to tell him: there were surely going to be more hard days and maybe even more failings in school, but he was the person I wanted to be standing next to during it all.  I wasn’t proposing, I was just letting him know I hadn’t let go.